Talking with Helena P. Schrader the author of the breakout book ‘Where Eagles Never Flew: A Battle of Britain Novel’

‘Where Eagles Never Flew: A Battle of Britain Novel’ by Helena P. Schrader is a slam-dunk in every area, delivering a compelling plot, engaging and intriguing characters, and a historical back drop that is nothing short of epic.

It’s the summer of 1940 and the Battle of Britain is about to begin. If the swastika is not to fly over Buckingham Palace, the RAF must prevent the Luftwaffe from gaining air superiority over Great Britain. Standing on the front line is No. 606 (Hurricane) Squadron. As the casualties mount, new pilots find a cold reception from the clique of experienced pilots, who resent them taking the place of their dead friends.

Meanwhile, despite credible service in France, former RAF aerobatics pilot Robin Priestman finds himself stuck in Training Command — and falling for a girl from the Salvation Army. On the other side of the Channel, the Luftwaffe is recruiting women as communications specialists — and naïve Klaudia is about to grow up.

If you want to find out what happens, and you know you do, then getting a copy of ”Where Eagles Never Flew: A Battle of Britain Novel’ is in your future. It is one of our favourite books and definitely a must read.

We are excited that Schrader took some time out of her busy schedule to chat with us.

‘Where Eagles Never Flew: A Battle of Britain Novel’ really blew me away. A great story is all about the setting, the descriptiveness, and the raw energy that captivates, all coming together to have the reader turning the pages effortlessly. Your book includes all of them. What is one of the keys that you find is critical when getting into the writing zone?

The characters. If I care about the characters, then I want to tell their story. That means I work very hard at getting the story right. Put another way, this is one of those books that I felt compelled to write because the characters would not leave me alone. I’ve called it living with ghosts, although I’ve never seen eerie lights or other apparitions. What I mean is simply that I am inspired to write someone’s story to the point where I literally cannot let it go. I resent almost anything that gets in the way of writing. In this case, I had a number of characters with parallel stories, so in addition to getting their individual stories right, I also had to choreograph their appearances in the framework of the novel.

We learned so much from ‘Where Eagles Never Flew: A Battle of Britain Novel’ along with being drawn so expertly into this intriguing story. What is it about the Battle of Britain that captured your imagination so early in your life?

Well, I think everyone loves a story where the innocent underdog triumphs over a bullying aggressor. The RAF’s defense of Great Britain against Nazi aggression is such a tale. Furthermore, the stakes were high and the margin of victory very slight.

Yes, many argue that Germany would not have succeeded in invading England even if the RAF had failed because the Royal Navy was more powerful than the Kriegsmarine. That analysis overlooks the fact that many in Britain’s ruling elite in 1940 wanted to do a deal with Hitler. RAF failure would probably have led to the fall of Churchill’s government and a negotiated peace with Hitler. In short, the stakes could hardly have been higher.

As for the margin of victory, it’s true that the RAF shot down more Luftwaffe aircraft than vice-versa, but if the bombers are removed from the equation, the victor was the Luftwaffe. RAF fighter pilots in front-line squadrons faced a better than 50% chance of being killed. Some pilots literally did not survive their first combat sortie. Many did not survive a week or ten days on operations. Nor should we forget that the risks were not death alone. Many pilots were burned beyond recognition or suffered other debilitating injuries. Almost all Battle of Britain pilots had aircraft shot to pieces under them and had to “hit the silk”, that is parachute to safety. That was not an activity without risk. Yet, pilots who bailed out were expected to immediately go back into the fray on their return, i.e. get into another aircraft and face the enemy again. At the height of the Battle of Britain, some squadrons flew as many as five times in a single day. By the end of the Battle, exhaustion was so great that some pilots fell asleep in their cockpits immediately after landing. Sheer exhaustion undoubtedly accounted an increasing percentage of the casualties. All that makes for high drama.

Last but not least, the Battle of Britain was fought “at home.” The young men engaged in it were not off at some distant front — certainly not “overseas.” They literally fought over their homes, their girl-friend’s homes, and the playing fields of the schools they had attended only months before. They could — and did — come off duty and go to a dance with their girl, or nip home to say hello to their Mum. Nothing could be better for a novelist, since this meant the private lives of the heroes and the stories of their loved-ones could be interwoven as an integral part of the novel.

What are you hoping that the fans take away from your book?

First and foremost, respect for the men and women who defended Britain in 1940 from the Nazis. However, I want that respect to go beyond the famous “Few,” the pilots, to include the controllers, the ground crews, and the other players who contributed to Britain’s victory.

I’d also like my readers to come away with an understanding of how difficult it was to achieve this victory at both the strategic and tactical level, and most especially in human terms. I’d like them to recognize that there was nothing inevitable about victory, and most important to feel a genuine sense of loss and sadness for those who gave their lives.

A secondary objective, the one pursued with my German plotline, is to awaken readers to the humanity of the enemy. Hitler and his regime were unquestionably evil and aggressive, but not every German was a racist fanatic. I wrote my dissertation about the German Resistance to Hitler, and I wanted to remind readers that there were Germans who opposed Hitler on moral grounds from before the start of the war — and also point out that there were many more Germans who, like most people today, thought politics had nothing to do with them. Most Germans in 1940 just wanted to get on with their lives and careers and, if they were young men interested in aviation, to fly fast airplanes.

If you could have anyone living or dead read your book and give you a review who would it be and why?

I have to say that it almost happened. By pure chance a copy of the first edition of this book fell into the hands of a Battle of Britain ace, Wing Commander Bob Doe. He sent me a hand-written letter in which he said my novel was “the best” book about the Battle of Britain he had ever read, adding I’d got it “smack on the way it was for us fighter pilots.” Although not a review, that letter and Doe’s permission to quote from it on the revised cover was one of the headiest and happiest moments of my life as an author. It still makes me very proud.

Obviously, just because one RAF veteran of the Battle liked the book doesn’t mean they all would. People’s taste in literature varies, and even veterans of the same conflict have differing experiences. After Doe wrote to me, I went back to read his memoirs and see if I could detect what it was that might have resonated so strongly with him. One thing that struck me is that one of my principal characters is a sergeant pilot from a humble background who comes to the RAF via the Volunteer Reserve — like Doe. The experience of such a man was inherently different from that of the professionals or, for example, those who came through the University Air Squadrons. So other veterans might not identify so strongly with my characters, although I have a variety and hopefully the research that enabled me to make a fan out of Wing Commander Doe might also appeal to one of the other veterans.

Writer’s block can be an issue for many writers. What is your unique way of getting past this issue?

For the vast majority of my writing life, I have worked a demanding, full-time, paying job that absorbed more 40 hours a week leaving me only the weekends and holidays for novel writing. In consequence, I’ve never suffered from writer’s block. I always had far more I wanted to write than time to write it in. What I needed, however, was a transition from one mind-set to another, and that was best achieved by a leisurely dinner and a bottle of wine (or two) with my husband at the end of the workweek. We could talk through all the things that had happened or needed to be done professionally on Friday night, and then I could plunge into my creative world on Saturday morning — well, after a morning ride, during the many years in which I was fortunate enough to own a horse. 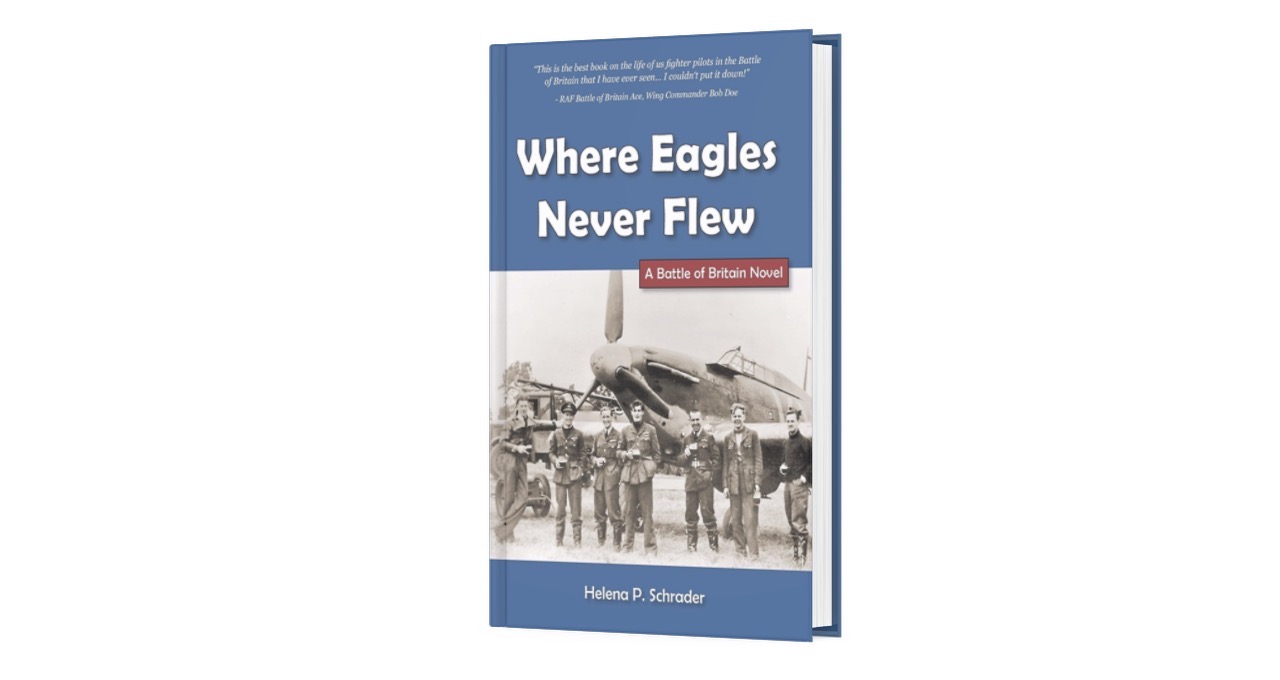 To find out more about Helena P. Schrader and ‘Where Eagles Never Flew: A Battle of Britain Novel’ head over to Amazon.

More from CultureMore posts in Culture »